In Ghana, a funeral is a celebration as well as a time of sadness. With prestige riding on the size and extravagance of the funeral, family members collect, borrow, and donate money to send their loved ones off to the afterlife in style. Funerals can cost up to a year’s salary.

A unique Ghana experience, are these fantasy coffins which come in all forms, only limited by the imagination of the commissioner. Be prepared to see large fish, Bibles, Coke bottles, vegetables and beer bottles to name but a few. Like what you see? You can have one shipped in preparation of your departure to the next life. Or just take a wander around one of these delightfully laid-back artist workshops, which once upon a time prompted former American president Jimmy Carter to commission a coffin in the shape of a cigar. The coffins intended for burial are made from a soft wood and cost about $700. The ones considered works of art and bound for homes and galleries, are made from mahogany. Those can sell for as much as $3,000. In 2014, a coffin in the shape of a Porsche made by Kane Kwei’s nephew and former assistant Paa Joe set a record for abebuu adekai at London auction house Bonhams when it sold for $9,200

In the Ga language, fantasy coffins are called abebuu adekai, meaning proverbial boxes, or coffins. It might take up to three months for the artists to re-engineer the method and aestheticism that comes with carving coffins used for the last rites of the deceased. Nonetheless, their works come to replace the stoic mahogany pine boxes with brass handles and whimsical hand-carved sculptures. Their pieces might be short-lived and go into the ground right after building, but sometimes they get ritually paraded and even end up being collected and exhibited as art.

During funerals at the Accra coasts, dancers, musicians and funeral criers ululate and careen to jama – the local Ga mixed with Pidgin English folk singing with hand drums and bells. The traditional Ga expression of radiance to usher away the departed is remarkable, and you might come across pallbearers toting a colorful sculpture of a beer bottle, microphone, lobster, salmon, camera, airplane, or rice sack coffin.

Where the story of fantasy coffins begins: Kane Kwei

The Kane Kwei (1924-1992) workshop, which is pinned between a barbershop and a clothing store in Teshie, ships up to 100 coffins annually to Ghanaians living abroad, as well as foreign collectors. The origin of the trade is linked to the story of one Ga traditional leader who ordered for a sculpture in the form of a cocoa pod. This leader passed away shortly after, and the furniture was converted into a coffin for the funeral. Kane Kwei followed this up with a coffin in the shape of an airplane for his grandmother, whose dream was to have a flight experience.

In the last 50 years, these fantasy coffins have become one of Ghana’s most unique cultural exports. The curious tradition of burying people in coffins shaped like everything from lobsters to busty women is primarily practiced in Accra and has spawned over 10 workshops in the capital city. Almost all of these are owned by former apprentices of Kane Kwei, who died in 1992. Today, six apprentices work at the original workshop alongside Kane Kwei’s son Cedi Anang and grandson Eric Adjetey Anang. The shop produces up to 20 coffins each month. Each year, Kane Kwei ships up to 100 coffins to Ghanaians living abroad, as well as art lovers everywhere from Denmark to Russia. 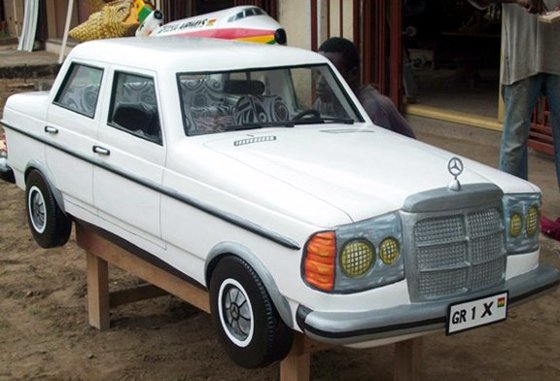