Erybody’s doin’ it! Around these parts anyway. If you haven’t witnessed some azonto moves, then chale u need fo go ghana party sef: Yep, earworm of a track, Sarkodie feat. E.L., U Go Kill Me, pure azonto, pure Ghana.

Azonto is a dance and music genre from Ghana. The dance is known to have originated from a traditional dance called Kpanlogo associated with the coastal towns in the country such as Chorkor, James Town, La, Teshie, Nungua and Tema, in the Greater Accra Region. 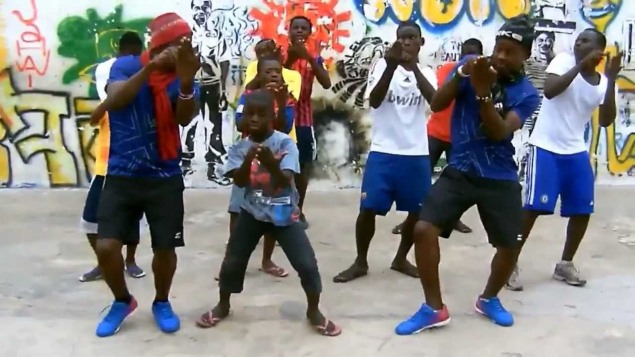 Gasmilla first commercialized the Azonto dance worldwide. In an exclusive interview with Flex Newspaper, Gasmilla, one of Ghana’s hiplife artistes’ with the current ”3 points” hit track, he noted that it is not true that Sarkodie gave birth to Azonto as the dance has been in existence for a long time and is mostly done by Ga communities.

Gasmilla revealed that he was the first musician to produce an Azonto video and that his ”aboodatoi” track which helped to bring to the forefront in the music industry was first uploaded by Legacygh on July 28, 2011 and was later uploaded by Ghanapromo on their YouTube channel on September 18, 2011. A music genre songs identified as those with Azonto beats are usually ones dedicated to the dance. However one can dance Azonto with other music genres.

The dance was first called “Apaa”(which means work) by the people of Bukom and its environs, this was to represent the movements like washing, driving, boxing etc that was associated with dance. However,the term ‘azonto’ which was popularly used among senior high school students to refer to a life later became accepted by the larger population as the name for the dance. The dance now known as Azonto was later observed in an evolved form among ‘street communities’ in Tarkwa, Abossey Okai, certain suburbs of Accra (namely Korle-Gonno, La and Chorkor), in pubs, night clubs, dance battles with friends and passers-by. Perhaps because of its apparent use of strength and vigor, and preference of the then popular and more sophisticated “crip walk” and “break dance” known in Ghana as ‘cracking’ in Senior High Schools, the dance was seen as being less refined than alternate styles.

With the advent of Azonto – a derivative of ‘Kpanlogo’, with the infusion of several other dance moves such as ‘Mezop’, ‘Awukye’, ‘Gbee Ohe’ and the like, Afrobeats music has taken on a whole new experience, as Azonto dance gives us the perfect avenue for dance expression. Azonto dance on Afrobeats has produced a visual delight, resulting in international recognition and acceptance.

The dance involves a set of hand movements that either mimic everyday activities or are meant to amuse an audience. It begun with one or two step movements but has been advanced to more complex and almost acrobatic movements. Just like most African dances, Azonto involves knee bending and hip movements. The dance has effectively evolved from a few basic moves to miming actions such as ironing of clothes, washing, driving, boxing, praying, swimming, and others.